My Aunt Dondie was in her 30s and was extremely beautiful. She was about 5″7 and was quite thick. Her lifestyle was hectic, always running errands and transporting her two sons from their classes and extra curricular activities. Her hair had gotten relatively very long. It was thick, black and quite voluminous. Her luxuriant black tresses now reached a fair bit past her shoulders.

It was a thursday evening, and aunty dondie had wanted to go get a haircut for a long time. She had finally found a bit of time so she called the hairdresser and drove down to the salon. She sometimes kept her hair long, though she much preferred her hair to be cut short and neat. It had been long for quite a while so now she wanted some change. She wanted a little difference.

She entered the hair salon and was greeted by Nisha, the hairdresser who usually cut her hair. There was no wait, so Nisha had Aunty Dondie take a seat in the chair.

“Actually I want you to cut my hair shorter than usual. A short bob I think its called” replied my aunt.

She asked my aunty to raise her head as she wrapped a piece of neckstrip around my aunt Dondie’s neck. Nisha always ensured that her service was as close to professional standard as possible. My aunt’s brown sandals rested comfortably on the footrests. Nisha produced a white and black striped cape and draped it around my aunt, engulfing her. Satisfied with her caped client, Nisha took the big comb and got to work on my aunt’s hair. Now Aunty Dondie’s hair was really quite lovely, very big and thick. It took Nisha a long time to comb out my aunt’s locks. Nisha was already imagining the amount she was planning to cut off my aunt’s head. Dondie was one of those ladies who you knew would rock shorter hair, so thats what Nisha planned to do; cut it extra short.

“Wow Dondie, your hair is really thick” commented Nisha as she finished passing the comb through my aunt’s thick locks.

“Thats honestly one of the reasons I want it cut short” said my aunty. Nisha pumped up the chair a couple clicks. Aunty Dondie sat there, with her hair flowing downwards and spreading out on the cape a bit. She knew that a lot of her hair was going to be on the floor in a while. Nisha grabbed a pair of gleaming scissors. She bent my aunt’s head downwards so that her chin was nestled on her breasts. Her eyes were trained on her brown sandals. In a fluid motion, Nisha spun the chair away from the mirror. She loved the element of surprise. In the waiting area there were a couple people, spectating my aunt’s haircut intently.

“Are you ready,?” Nisha asked. Dondie nodded and smiled. Nisha, using the comb, raised up a large mass of hair over my aunt’s right ear. It almost seemed as though the comb was straining to hold the bulk of her locks between its teeth. Using the scissors over comb technique, nisha closed the sharp metal blades repeatedly. ” Snip snip snip….” went the blades as they clipped off my aunt’s locks. Aunty Dondie watched as her thick black hair fell onto the cape, some sliding off onto the ground. Her once “past shoulder length” hair was now reduced to a little longer than chin length. Nisha passed the comb, then continued snipping away at her hair. She continued shearing my aunt, working her way around Dondie’s head. By the time she put down the scissors, the floor had lots of what used to be her gorgeous hair on it. Large tufts of black hair as well as many stray strands lingered on the cape. A ton of hair had been removed from my aunt’s head. Aunty Dondie looked on the ground, and upon seeing her chopped locks, she grinned. She realized that the hairdresser was cutting off a lot of her hair, but she was kinda enjoying it. The haircut was not done however. Nisha switched on the clippers and began removing excess hair. She refined the shape as she clipped away. My aunt heard the malicious buzzing of the clippers as it efficiently cut her hair. Aunty Dondie noticed that she spent a lot of time trimming the back. She also felt a ticklish sensation as Nisha used the clippers to shave off bits off fuzzy hair from her neck. Soon the buzzing of the clippers ceased. Smiling broadly, Nisha spun my aunt around, towards the mirror. As she saw her new short haircut, the first thought that crossed her mind was whether her sons and her husband would like it. Either way, she liked it very much.

“Its really good. Thanks Nisha” said my aunt.

Aunty Dondie ran her fingers through her hair, as tiny bits of cut hair fell out. Her hair really was a lot shorter than before. She saw the entirety of the cape in the mirror’s reflection, covered in thick black hair. What used to be HER thick black hair. Nisha uncaped my aunt, allowing the hair from the cape to fall to the ground, forming even bigger clusters of black hair. 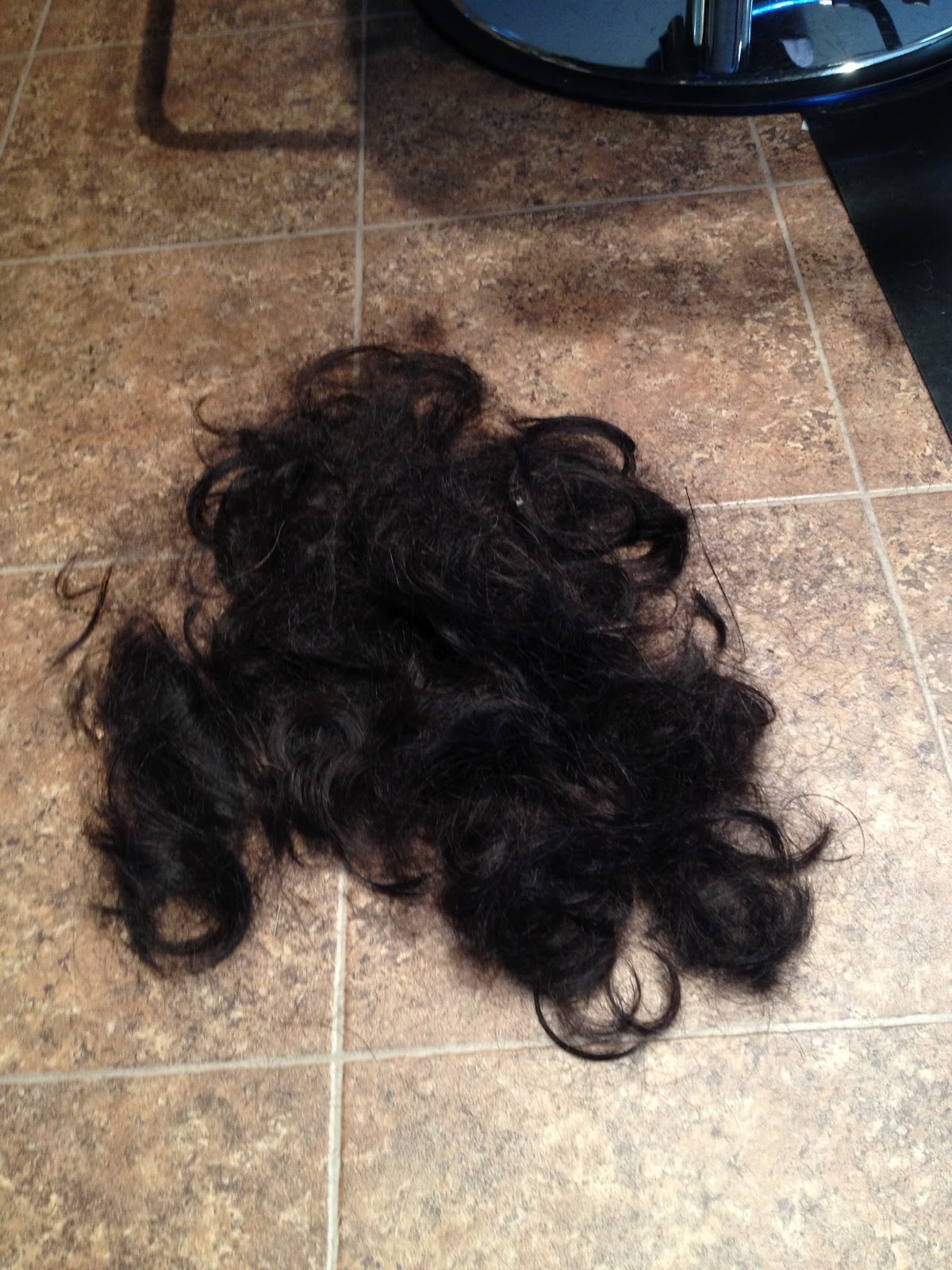 Aunty Dondie realized that her clothes and shoes were covered in bits of hair, but there wasn’t much she could do. After Nisha removed the neckstrip, my aunt alighted from the chair, paid the hairdresser well and drove home.

As soon as she entered her house, she was greeted by her younger son.

“Why did you cut your hair so short mom?” he asked.

“No its not… see its just below my chin.”

“That is very short mom. But its nice,” he said and walked away.

Her husband and eldest son did not have anything to say. It was as if they hadn’t noticed. But that actually didn’t bother her because she loved it. It was definitely easier to manage than her previous massive locks.

The next day, I met my aunt for the first time since her haircut.

“Hey” she replied. After talking a bit , her hair became the topic of the conversation.

“So you cut your hair!” I exclaimed.

“Yes you noticed! You know nobody really seemed to care in my house back home.”

“I was looking for a change. Something a little different. Also I like when my hair is short.”

“Short hair really does suit you. Can I feel it?”

I ran my fingers through her lustrous hair which had been cropped quite short. It was quite amazing.

Up till this day, every so often, Aunty Dondie goes and has her hair cut very short. Its always quite a spectacle.