My motivation to write this story was reading JuliaNZ’s story.  I too have the “condition”.   Growing up an only grandchild to hairstylists started my condition.  My grandfather was trained as a barber and hairdresser as well as a mason.  I would spend much of my childhood watching him cut and style hair.  He would also talk to me about how to cut hair and do perms.

It was the 80’s so every women seemed to have a perm so I got to watch a lot of them being done.  I  found that I loved every aspect of the process and could speak fluent shop talk regarding different rod sizes, types of perm solution, and so on.   American Salon magazine was one of my favorite reads.

My mom had wanted me to get a perm since I was 11 years old because I had such unruly hair full of cowlicks.  Gramps felt that a boy should not wear his hair long and thought I could and should work with my natural curl.  This was not so easy as it is today because there were not the array of curl enhancing products there are today.  So I just lived with my unruly hair until my mom and I moved to a different state my junior year of high school and my grandfather was not seeing me every week anymore.

I spent the next year scoping out various places to get a perm (I particularly liked Regis Salons because I noticed all the perms had to process under the dryer) and observed both girls and boys at the school getting perms.  I was so excited on Mondays to see who got a perm over the weekend because someone always did.  Finally a year later I decided it was time for me to perm my hair.  It was January and I had seen my grandfather over Christmas and he had cut my hair.  It was a little shorter than I liked but still long enough for a tight perm.  I told my mom Friday afternoon before my high school basketball game that I hated my hair and would like to get a perm.  She was more excited than I was.  She suggested Super Cuts because that is where she went and they were having a sale.  I went out that night after the game and partied with friends but could not stop thinking about the next day.

Mom woke me up around 9:30 and said she made an appointment for me at 11:30.  She asked me if I wanted her to go with me but I said I could handle it alone.  I got dressed and only ate a little something because I was so nervous.  The drive was 30 minutes so I headed there at 11 am.  I almost got lost but eventually found the place at exactly 11:30.

I went in and told the receptionist who I was and that I had an 11:30 appointment.  Her hair was long and beautifully permed as was everyone’s hair in the shop.  It was a quiet morning and I was about the only one there.  The receptionist called Julie and said her 11:30 perm was here.  I was so excited that I think I was shaking.  Julie brought me to her chair and asked if I had every had a perm before and did I want loose or tight curl.  I told her no I never had a perm before and I was hoping for a tighter curl.  She said in almost an annoyed voice, “Well you need a haircut first because this is a mess.”  Maybe she was having a bad day or was hung over because she was seemingly irritated to have to perm my hair.

While she might have been crabby she did a great job washing my hair.  Back in the chair she proceeded to section and cut my hair for a good 15 minutes the whole time complaining about what a bad haircut I had.  This bothered me but I did not tell her my grandfather cut it.  She was very meticulous about checking the length and really did a nice job except I was worried she would say the hair was too short to perm.  When she was done cutting she put down her scissors and said, “Are you sure you want a perm?” again almost like I was inconveniencing her.  I said yes and she replied, “Well it is going to be a messy procedure.”

So off she went in the back room to get the perm supplies.  At this point I was realizing that the perm is going to happen after all these years.  I started getting very aroused, thank god for the cape.  Julie rolled the trolley of perm rods and solution toward the chair.  I was shaking with excitement.  She pulled out a tray of blue rods and then mixed some yellow and reds with them.  She grabbed a rattail comb and spun the chair away from the mirror.  The hair was so short that she just parted and combed it to create sections.  She soaked the hair with perm solution first and starting at the crown she pulled the hair up between her fingers and wrapped an end paper around it.  Skillfully she took a blue perm rod and rolled it tightly to my head before securing it with a rubber band.  I could not believe how tight it felt and how hard I was becoming.  She finished the back in a few minutes and worked her way toward the left side of my head.  Another 5-10 minutes she had wrapped the left side and asked how I was doing and said she was almost done.   It was really cool to see her wrapping the front side of my head with a tiny red rod.

She swung me toward her and pushed my head down.  The perm rods tray was right in front of me so I could see which curlers she was using.  In a matter of minutes she turned me toward the mirror and said, “So what do you think?”  Most of my head was now covered with blue and yellow perm rods except around the face and neckline where Julie had to use red rods because the hair was so short.  I think I almost came in my pants but just responded that I looked cute.  10 minutes later I was fully wrapped and had cotton tucked around the hair line.  This was a cold wave so no hair dryer much to my disappointment.  Julie had me cover my face while she dosed all the rods with cold smelly solution.  Then oddly she removed the cotton before covering my head with a plastic bag.  I should have asked her for more cotton but I was too shy to be demanding.  Blotting my face with a towel constantly for 20 minutes was a drag but worth the end result.  Julie took off to smoke but the other girls in the shop took mercy on me by getting me magazines and helping me put on my glasses.  They were more attentive than Julie really.

I could not stop touching the perm rods as they felt so good in a strange way.  Before I knew it the buzzer sounded indicating I was done.  Julie brought me back to the sink and unrolled 3 rods to check on the curl.  I guess they were fine because she never said anything (as I said, personality plus) and just leaned my head back into the sink.   The rubber sink spray head felt so fantastic as she pressed it tight against the perm rods.  After 3 or so minutes of rinsing she sat me up and pressed on the rods with a towel for several minutes to get all the water off them.  Back in the sink my head went for the final 5 minute neutralizer treatment.  Finally the buzzer rang again and Julie began to take the rods out carefully.  She told me that it was really curly and might take some time to get used to.  After the last rod was out she rinsed me again and put a post perm solution on the curls.

After putting a towel over my head to dry the hair she took me back to the chair.  I was nervous, scared and turned on all at the same time.  She removed the towel and then went to get a hair pick to separate the curls.  Looking in the mirror I saw that my hair looked a little more curly but it was still sitting down close to my head.  Then she ran the pick through my hair and the curls exploded everywhere.  It was so tight and the hair appeared so short.  She told me to not wash it for 48 hours, buy a hair pick, and let the back grow out a little.  I could not believe I had finally gotten a perm; I was speechless as I made my way to the desk to pay.  Every stylist in the shop commented on how good it looked.  I was a little embarrassed and thought they were just being nice but I was to find out that they were being sincere. 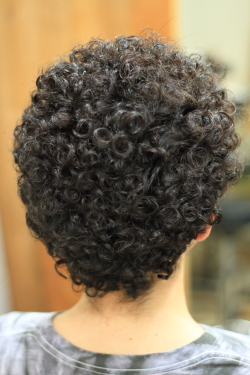 My mom absolutely loved it and could not stop touching it and complimenting me.  Monday on the bus to school I was like a rock star.  Everyone wanted to know when I got it and why.  I had more attention from girls than I could have imagined.  At school I got a little ribbing from my guy friends but mostly compliments especially from the girls.  These compliments continued for weeks afterwards too.  It was awesome.

I kept my hair permed for the rest of the school year but decided to not perm it the first year of college.  Right before my start second year I finally went to Regis and got that heat activated perm under the dryer.  It was a much looser wave on white rods that I liked a lot better and again I was a hit with my friends when I got back to school.  It remained permed until about 1998 when I cut it shorter.

I discovered that had a lot of natural curl and with the right styling products the curls were very manageable and looked good.  I still have a full head of hair and keep the grays covered and get a full foil highlight every 4 months to give it a little pop.  My current stylist is only 22 years old but she is able to do babylights that are super subtle even though I have about 20-30 foils on my head.  She says she wants me to look good but not girly.

I really enjoy my trips to the salon and love the pampering.  My style is never really fem and I don’t have any desire to paint my nails, wear makeup, or wear a dress.  Not that there is anything wrong with that, to each their own.  Every other aspect of my life is very masculine but I do enjoy expressing a feminine side with my hair routines.  Thanks for reading and in case you were wondering, I never went back to Julie.